What happened to the inventors?

I visited Italy for the first time this year, and no surprise, was rustling for a selfie stick on every street corner. Like the whole world told me, the scale of the handiwork from a lot of 15th century thinkers wasn’t done justice by the photos I’d seen.

In humanities classes I learned about the David and architectural marvels like Il Duomo but seeing them in person left me asking myself:

What happened to the inventors?

Really though, who is mastering their craft to such a degree that we’ll still be talking about them in a few hundred years?

What happened to the inventors extracting masterpieces from raw marble?

Where’d the inventors go that broke the boundaries of architecture by elevating a 45m (150ft) dome 116m (380ft) off the ground?

On top of it all, how did Italy score so many jackpots that they were also the ones who invented pizza?

My fear is we are leaving behind an era that cultivates inventive minds that are chomping at the bit to build.

Who were the inventors?

Michelangelo, Brunelleschi, Da Vinci, et al. had something special about them. The archetype of the Renaissance man that could do it all was one they each fit. On top of the things they’re known for, Michelangelo was also a poet, Brunelleschi a sculptor, and Da Vinci a paleontologist!

Did you know on top of all of his contributions to science, Galileo was also a d*ng good musician?

The examples aren’t just from the Italian Renaissance either:

Over and over again, there are these remarkable people who seem to be able to do just about anything.

On becoming an inventor

From what I’d guess, the average working individual works to live, to support a family, themselves, or to get back to whatever they enjoy doing more. I hypothesize that the inventor revels in their craft and working to live happens naturally as a side effect of them finding some degree of joy in their work.

I consider a spectrum with the adherent (what I’d dub the opposite of the inventor) on one end, and the inventor on the other. Though most people fall somewhere in the middle, I start to categorize behaviors on one of the two ends.

To the inventor, I don’t think their trade feels like work! A trite aphorism comes to mind:

choose a job you love, and you’ll never work a day in your life

Now, I don’t believe this is realistic advice. Cal Newport would argue you don’t stumble upon your passion, you start working really hard and eventually that thing becomes your passion. Newport might change the phrase to something more like “choose a job you’re good at, and you’ll eventually never work a day in your life”.

Could it be then, that the inventors are simply just the average people who worked really hard? And then by accident, their work no longer feels like a burden?

One could argue that the term “inventor” nowadays goes by a different name: entrepreneur, scientist, research, analyst… though I don’t think that’s necessarily the case. We still have inventors among us, and I think it’s more the nature of how they work than the title they carry or field they come from. To me, there are more and more dangerous ideas threatening their being.

I know there are still some inventors left, because somebody in Rome installed these water fountains that dispense sparkling water: In all seriousness, I hope to be able to identify more modern day inventors in the present. Some possible examples that come to mind:

Listening to Elon Musk or Luis von Ahn (or any other modern day inventor) talk, they seem to love their work, but they also work really hard. Luis voh Ahn would study math books as a kid just because he could! The common thread I draw between these inventors I’ve mentioned is a stupidly simple parallel of hard work.

The extinction of hard work

So how did we get here? From a cold, hard, world that cited scripture “he that will not work shall not eat”, we now crave 4 day work weeks (or even 4 hour work weeks). A 2.1 million strong subreddit “for those who want to end work” called r/antiwork would rather see the demise of hard work, than its nurturing. TikTok influencers humble brag about their plush jobs, while others glorify their minimal effort and go so far as to name it things like “quiet quitting”. Won’t that be bad for us?

We need inventors to usher in the changes that make the world a better place. Without the hard work, where will they come from?

When it comes to identifying who will become the future inventors, I’d put my money on those who are doing and exploring the most in their own work.

Raphael famously painted Michelangelo into the School of Athens alongside other titans of engineering, math, and science who preceeded them. Raphael recognized Michelangelo for his work (that was still ongoing) to paint the Sistine Chapel. 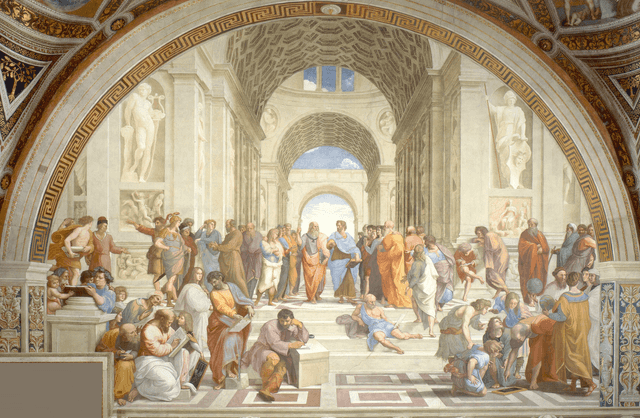 He even went so far as to paint himself into the School of Athens. Somehow he knew that he himself would belong up there next to all the other inventors. And what do you know, he was right, we’re also talking about him centuries later.

How did Raphael know? Was it because he painted the subjects of the the School of Athens, that we consider them great? Or did he just happen to know who would stand the test of time?

I believe we have a world full of eventual inventors. With some hard work, and attention to their craft, I think many of them will become the future inventors, and it’s those who put in the work that I’m putting my money on.

Whenever I meet a successful CEO, I ask them how they did it. Mediocre CEOs point to their brilliant strategic moves or their intuitive business sense or a variety of other self-congratulatory explanations. The great CEOs tend to be remarkably consistent in their answers. They all say, “I didn’t quit.”

I hope my trip to Italy wasn’t the last I’ll see of an era of invention.