Life is a Fire

I sat today with my eye closed and thought about a fire. I had recently listened to Jon Hopkins’ Sit Around the Fire and considered how my own circumstances were a lot like times when I’d sat around a campfire. 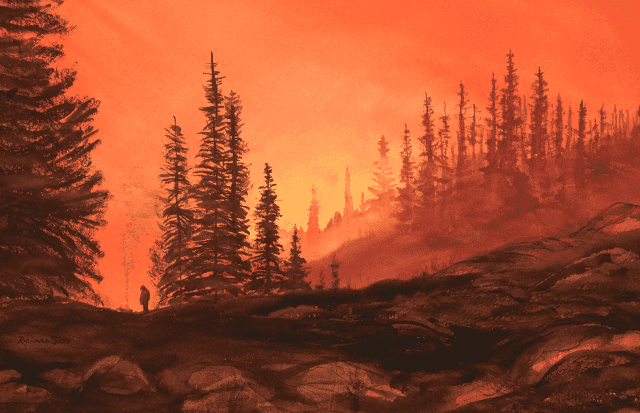 There are 2 things I’m surprised to never grow tired of watching:

For whatever reason, I can watch waves crash and recede over and over, for hours, and keep watching. It’s soothing, and every wave is different. You wonder if one will crawl further up the beach until one inevitably does. Campfires are much the same way. Flames lick at wood, branches, logs, and consume them. The fire is always changing, and never the same. I can watch as flames change, and find something new to be interested in almost indefinitely.

Fires are interesting to me though, because there are always a few other things at play.

The same way I observe a fire is a lot like how I’ve observed my own life to date. I think the components of the fire: the wood, the smoke, and the flames themselves all parallel little pieces of life.

A few verses of scripture have always left me thinking about how the natural world has so much more for me to learn than I give it credit for:

All things can teach us.

A fire flickers when it’s left alone and ignored. Without wood, it will shrink. I think the brightness of my life, or how bright I’ll shine and how warm I’ll feel directly relates to how consistently I stoke the flame of my own life.

My core goals and values are my kindling, they ignited a fire that fills my life with warmth and light. Developing relationships with important people in my life and enriching my life through study, prayer, and regular renewal of important promises I’ve made (like my marriage vows, covenants with God) started something special.

The more consistently I focus on priorities that matter most, the brighter the flame of my life grows.

The Flames and Brightness

Though I’ve already alluded to it, the brightness of the flame parallels the fruits of good choices I’ve made in life. As I stoke the flame with good sources, the flame burns brighter, every time, without fail. There is no exception to the natural law. If I place the log far from the center of the fire, perhaps it takes time to burn, but eventually, burn it shall. Sometimes that takes reshuffling where the logs are placed, like quitting a job, making a new friend, or moving to a new place.

In Scripture, Nephi saw the justice of God dividing righteous and wicked people, which he described like this:

1 Nephi 15:30
...the brightness thereof was like unto the brightness of a flaming fire, which ascendeth up unto God forever and ever, and hath no end.

This teaches me that I can always do more to grow and shine brighter, whether that’s sharing my flame with another (which interestingly does nothing to diminish my flame), or rearranging my life to focus back on the center of the fire.

The Frustration of Smoke

Every fire (and especially every campfire) has smoke. Somehow it always seems to be getting in your eyes and staining your clothes and hair. Smoke is so notoriously obnoxious around a campfire you’ll hear cutesy adages like “smoke follows beauty”, as if to try and explain away the reasons for the grief.

In Biblical times, Jesus was posed a similar query by one of his disciples about a man born blind:

John 9:2
2 And his disciples asked him, saying, Master, who did sin, this man, or his parents, that he was born blind?

For some reason, we want to believe that bad circumstances must be attributed to something. Does smoke follow beauty? Or does it simply be?

John 9:3
3 Jesus answered, Neither hath this man sinned, nor his parents: but that the works of God should be made manifest in him.

Around a fire, smoke is sometimes blowing another way, sometimes it’s coming right at you, sometimes you move to avoid it and it follows. I think frustrating periods of grief are similarly inconsistent, non-existent, or follow me throughout my life. The smoke is always there, but it is just another natural element of the complete setting. Blindness could be seen as a harsh physical ailment, but instead it became a miraculous example that has inspired me over and over again.

Sometimes I make mistakes and put wet leaves on my fire, and that expresses itself as even more smoke. There are indeed consequences, but even good wood creates smoke.

Smoke distracts me from the fire, rather than watching the flames dancing I find myself swatting and dodging. It helps to understand that the smoke is always a constant.

Circumstances in my life may change to make it frustrating, but like the fire, they’ll change until I can refocus on the fire.

Life is the whole composition. The flames, the wood, the smoke. All three are essential, and all three are closely related, the wood eventually becoming the smoke. The inputs to my life become its outputs.

Having the privilege to observe the beautiful dance among the flames of life is the result of a consistent daily battle to make your life better.